This page discusses the use of ANSI.SYS in COMMAND.COM, both native in MS-DOS.

Unfortunately, ANSI.SYS is not available in Windows NT4..8.1.

In Windows 10, ANSI functionality is built in CMD.EXE by default, without requiring to load ANSI.SYS.

Use ANSI sequences to:

You can use ANSI sequences to creaty fancy prompts or text screens or even text mode animated screens (though it may take several days to create one ANSI animated screen).

For ANSI sequences to be shown, they have to be sent to the screen. You may use either TYPE, ECHO or a combination of PROMPT and ECHO OFF, or even any combination of these methods within a single batch file.

The only requirement to use ANSI sequences is the line:
DEVICE=ANSI.SYS
in your CONFIG.SYS, at least for DOS systems.
Or use some other ANSI "interpreter", like ANSI.COM, by Michael J. Mefford.

OS/2 command prompts do not need ANSI.SYS, since the ANSI functions are built in the command processor. To use ANSI sequences on DOS command prompts in OS/2 you'll still need to load ANSI.SYS in CONFIG.SYS.
It is possible to disable ANSI in OS/2 with the command ANSI OFF
Likewise you may enable it again with ANSI ON

You may have to change the codepage to 437 in some editors.

FORFILES interprets hexadecimal characters (0xdd format) in the command line "on-the-fly".
FORFILES will repeat the specified command for each file matching the optional file mask (default: *.*) in the optionally specified directory (default: current directory).
To make sure the command will be executed once, specify %~dps0 (short path of the current batch file's parent folder) for the path and %~nxs0 (current batch file's short file name and extension) for the file mask:

You may combine as many text attributes as you see fit.

For PROMPT strings some extra ANSI sequeunces are available.

Take a look at ANSIDEMO.BAT for some examples of cursor positioning and text attributes.

Shown below is a picture of the ANSI screen output for AN_APPLE.ANS, a fine example of ANSI art by Chris Blanton:

View it in text mode by changing to the right directory and using the following command:

Robert Van Etta found out that ANSI functionality is back in Windows 10.
To demonstrate it, he wrote Snake.bat, a "bouncing snake": 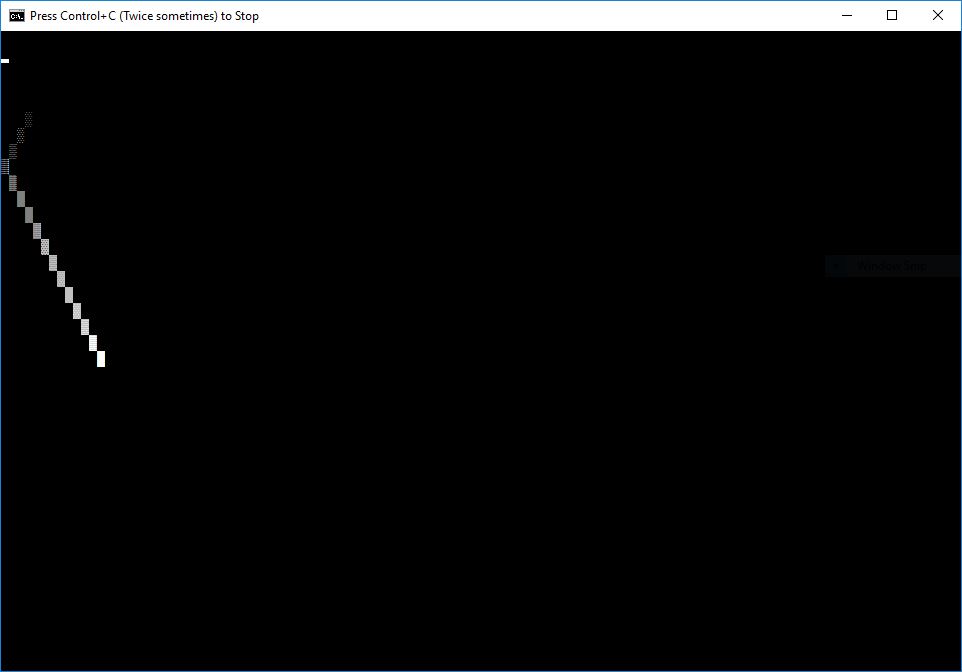 Take a closer look at this demo code, Robert has used a clever way to generate the Escape characters using FORFILES.

There may be occasions where you don't know in advance if ANSI.SYS will be loaded or not.
You can check if ANSI.SYS was loaded using MEM /C but that only looks for ANSI.SYS or ANSI.COM.
Utilities like BATCHMAN do a better job since they search for functionality, not for a particular driver. (On the other hand, once you are using BATCHMAN, why not use that to display colored text etcetera? Unlike ANSI.SYS, BATCHMAN will even work in Windows 2000.)

In many cases ANSI.COM may be a better solution.
Like BATCHMAN, ANSI.COM was written by Michael J. Mefford.
When called - at the start of a (DOS) batch file - it will load only if no other ANSI "interpreter" is active. When loaded it will function just like ANSI.SYS would. At the end of the batch file, you may unload it again, freeing memory for other programs.
By using ANSI.COM, you can make sure that your batch files will display their fancy colors just the way you intended them to.

Unfortunately, ANSI.SYS is no longer available in CMD.EXE (NT 4 and later).
Using ANSI like features will require third party utilities.

Carlos M. wrote BG. Initially intended for Batch Games, it can be used to colorize console windows of any type.
It is a modern replacement for BATCHMAN, and unlike BATCHMAN it will even work in 64-bit environments.

When you want ANSI functionality for text "enhancements", have a look at Norman De Forest's EKKO, an ECHO enhancement that can process almost every PROMPT function including coloured text (even without ANSI driver).
And the best part is, it works just as well in Windows NT.