The main focus will on installing software, drivers, etcetera in Windows (NT 4 and later, not 9*/ME), not on installing Windows itself, though some links will be provided.

I won't restrict myself to a single script language, the goal is getting the job done.

The installation commands or scripts are roughly categorized:

Preparing harddisks for a new operating system is tricky, because it can be done only when you boot from another medium like a floppy disk, CD-ROM or bootable USB stick -- or another harddisk.

• Probably the most well-known tool to (re)partition harddisks is FDISK.
FDISK is a native DOS command, so if you created a bootable DOS diskette you probably have a copy of FDISK.EXE or FDISK.COM available.
From my own experience, however, I would advise against using FDISK on modern computers.
FDISK has been known to miscalculate partition sizes and create overlapping partitions. In most cases you wouldn't notice this until a partition is almost completely filled with data, which will then be lost.

• If you still own a copy of an old Norton/Symantec Ghost version, you can use GDISK to (re)partition harddisks.
Copy GDISK.EXE to your bootable medium (floppy disk, CD-ROM, USB stick).
GDISK.EXE is for 16-bits DOS; if you boot with a 32-bits OS, like BartPE, use GDISK32.EXE instead.
Boot from that medium and issue the command GDISK without any command line arguments to list all harddisks with their numbers. This is especially important if you boot from a USB medium, as this may often be recognized as harddisk 1, and the internal harddisk as harddisk 2 (depending on the computer's BIOS and the type of USB medium). And we wouldn't want to accidentally repartition our bootable USB stick or external harddisk, now would we?

Let's suppose our USB stick is listed as harddisk 1, then we can repartition the "real" harddisk (2) with the following commands:

By default, Windows is installed with DHCP enabled for all network adapters.
However, you probably want to use static IP addresses on servers.

This is where NETSH is put to good use.
NETSH is available on Windows XP and later versions.

I won't describe all NETSH's command line parameters, as there are enough to write a book on it.
Start by typing NETSH /? on a command prompt and explore from there, if you have some time to spare.

What I will describe is how to create your own NETSH scripts.
As an example we'll use NETSH to set a static IP address for a network adapter, instead of DHCP.

For a single network adapter you'll probably see something like this:

Before we change any network setting, we'll first save the current settings to a file:

If we ever want to restore the current DHCP setting, all we need to do is issue the following command:

Type IPCONFIG /ALL again to check the new settings:

If the settings are OK we'll save these new settings to another file:

This section was written for Windows XP and TCP/IP v4.
It is kept here in case you might still need it.
For Windows 7 and later, skip this section. You can click the button on the right to hide this section semi-permanently (for 1 month if cookies are enabled).

Open this file netsh.staticip.template in any text editor and look for the following lines:

We could copy the template to a separate script for each server, and adapt the addresses manually.
Or we can remove these last lines shown above from the template and create a batch file that will add them on the fly:

To set static IP address 10.0.0.156 on another server, run the batch file above with 156 as its only command line argument.

Now use a tool like WinMerge to compare the 2 scripts: 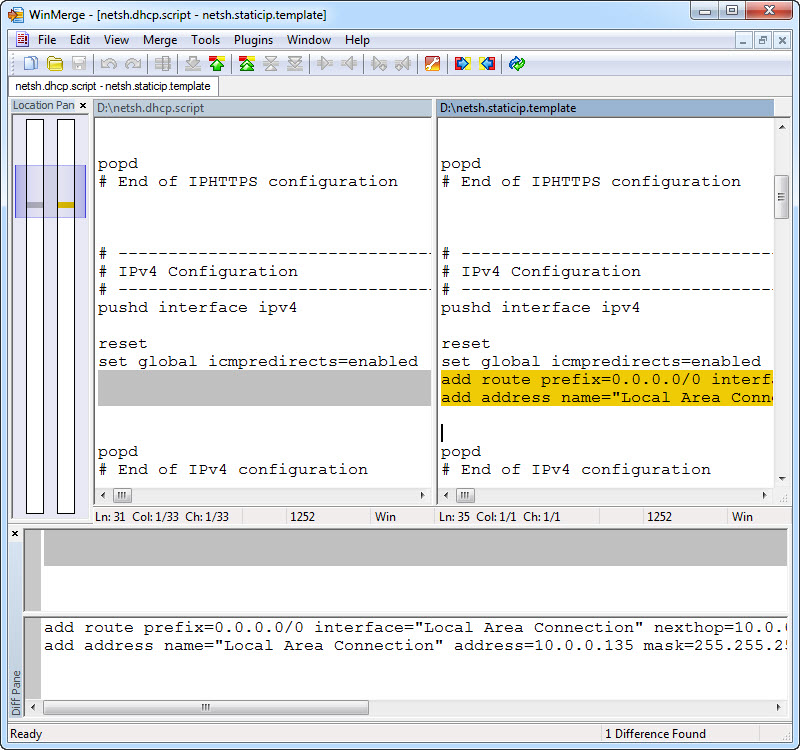 The part above (both black and red) is exactly the part that we can now save as a NETSH script (let's name it netsh.staticip.10_0_0_135.script)

As can be seen in the left WinMerge pane, the code to restore the settings for this particular network connection is:

You may want to save it as netsh.restore.dhcp.script

This isn't that much code to create on the fly.
The following batch file dynamically creates and executes a temporary script to set a static IP address.
The only command line parameter required is the last octet of the new IP address:

Admin's Guide to Server Core Commands.
Includes commands to rename a computer, join a domain, and many more...

Microsoft's NETDOM command line tool can be used to:

As we are discussing software installations, we will focus on local users and groups.
However, since we'll be using the NET command, it won't be that hard to translate the commands to domain users and groups.

creates a new user account and sets its password.
The following command will add the new command to the local Administrators group:

To create a new domain administrator account, use the following commands:

This works for Active Directory too, the new account will be added to the "Users" container.
In Active Directory, the DS Tools are the preferred tools to manage user accounts, groups, computer accounts and OUs.

Many commands on my Useful Commands for Windows Administrators page can be useful for unattended installations too.

Permissions on files and folders can be set using CACLS or its Resource Kits counterparts XCACLS or SUBINACL.
SUBINACL can even be used to find and replace permissions.

To change ownership a third party tools like SUBINACL is required.

Registry permissions have always been a pain...

Using MMC to create custom security templates, you can use SeCEdit to apply them unattendedly.
This way you can set permissions, inheritance and/or ownership on files, folders, services and registry keys.
Read more on my SeCEdit page.

Or download and use Microsoft's SUBINACL.EXE, which allows a little more "detailed" permissions configuration.

For registry changes, REGEDIT is the tool to use.
It may not be as simple to use as REG.EXE, but at least its command line usage has remained unchanged since Windows NT 4. If you plan on using REG.EXE, on the other hand, you'll need to check its version and modify the command line(s) accordingly.

The command you are likely to use most often is the import (or merge) command:

REGEDIT.EXE regfile.REG imports (or merges) regfile.REG into the registry.
/S makes this a silent import (by default the user is prompted for confirmation, and the import is confirmed afterwards).
START /WAIT makes the batch file wait for REGEDIT to finish the import.

• Use RUNDLL32 PRINTUI.DLL,PrintUIEntry to install and configure printers.
RUNDLL32.EXE and PRINTUI.DLL are both native in Windows 2000 and later (as a matter of fact, RUNDLL32.EXE has been around a lot longer, as you might guess after taking a look at my RUNDLL page).

With PRINTUI.DLL you can add, configure and delete printers and printer drivers, both local and remote.
The command line switches can be supplied on the command line or read from a file.

Unlike PRINTUI.DLL, PRNADMIN.DLL can be used to create printer ports too!

• If you need to migrate a single printer, use my ExpPrnDr.bat (Export Printer Driver) instead.
It uses Microsoft's DEVCON.EXE to list all files belonging to a specific printer driver, and PRINTUI.DLL to install that printer driver on any computer.
Tested only on Windows XP, may work on Windows 2000.

• With Microsoft's PrintMig tool you can create backups of your complete set of printers, ports, drivers, print processors and print monitors.
Unfortunately there is no way to selectively backup nor restore, so you may want to backup a clean test system with just the printers and components you need to migrate.
I successfully used it on Windows Server 2000 and 2003, with some manual tweaking afterwards for the latter.

• For Windows Server 2008, Windows Vista and Windows 7, PrintMig should no longer be used.
Instead, use the Printer Migration Wizard, or the PRINTBRM.EXE command-line tool located in the %windir%\System32\spool\tools folder.
To backup, use:

• An often overlooked way to add a network printer connection to a Windows computer is the following one-liner:

or, if the printer name contains spaces:

Granted, this isn't a completely unattended installation, as it will still ask for confirmation from the user. But, hey, it's simple!

There are several ways to install or migrate Scheduled Tasks.

• For Windows NT 4 use the AT command to list all tasks, and reschedule them again with that same AT command.
As I doubt this will be used very often nowadays, I won't go over the details.

• For Windows 2000 and XP, you can use JT from the Resource Kits. List all jobs with the JT /SE command, then list all properties of each job using the JT /PJ job command:

Analyze the results and use JT to rebuild the tasks.

to set the credentials on the target computer.

• For Windows XP and later, SCHTASKS is the preferred command.
The procedure is the same as described for JT, but with different command line arguments.

Automating the migration (inventory) may be more of a challenge, because of SCHTASKS' more verbose screen output.
Try:

In Windows 7 (and maybe Vista too?) an extra challenge will be the dispersal of scheduled tasks over several locations.

You may want to use JT for the inventory, and SCHTASKS for creating the new jobs.

• Many hardware drivers come as .MSI files, in which case you can (un)install them like any other .MSI package.

• If a driver comes as a set of (uncompressed) files including a .INF file, use:

The number 128 in the second RUNDLL32.EXE command means no reboot:

If the path or file name of the .INF file contains spaces, use the short file name notation. Never use quoted long file names!

• Another way to install drivers that come with .INF files is using DEVCON:

• Another use for DEVCON is to remove existing devices, even when still physically connected, install new drivers and then rescan for "new" hardware to reinstall the devices with the new drivers:

To use encryption we will need keys and certificates.

CERTREQ and CERTUTIL from the Windows Server 2003 Support Tools can be used to query and manage (CA) certificates without user interaction.

In Windows 2000 and later, CRYPTEXT.DLL can be used with RUNDLL32.EXE:

CryptExtAddCER will open the wizard to add a certificate with a .CER extension, CryptExtOpenCER will display a .CER certificate's properties dialog.

You can use KiXtart's or VBScript's SetFocus( ) and SendKeys( ) functions to "click" through the wizards' dialogs.
If you use this method in automated installations, make sure a user is logged in and understands that he/she should not touch the mouse or keyboard until the installation is finished. Otherwise, if the wizard's dialog looses focus the installation will fail.

Microsoft's CAPICOM in conjunction with KiXtart, VBScript or (Object) Rexx can also be used to manage certificates.

Or use WinHttpCertCfg or CertMgr, both from Microsoft too.

The general command syntax for unattended installations of .MSI files (with verbose logging, without reboot) is:

The general uninstall command syntax (with verbose logging and without reboot) is:

The latter does not require the original .MSI file. The unique identifier can be found in the registry under HKLM\SOFTWARE\Microsoft\Windows\CurrentVersion\Uninstall, it is the name of the subkey.
You may also want to take a look at the UninstallString values under each subkey.

My own GetUnins.vbs uses this technique.

More details and links are available on my MSIEXEC.EXE page.

A great source for preconfigured portable applications is PortableApps.com.

By default command extensions are enabled. However, to be absolutely sure that they are, either use SETLOCAL ENABLEEXTENSIONS within your NT shell scripts (batch files) or execute those scripts using CMD /X.

Read my SETLOCAL page if you intend to use SETLOCAL extension switches.