Thanks Tim
2017-03-05
• I added a new Hardware section to the Miscellaneous submenu.
It will feature real hardware as well as specific hardware related software and scripts.
2017-02-28
• Usually, if I have to delete an entire directory tree, I use Windows' RD command:

Today, however, I ran into a "path too long" error, and neither RD nor Explorer were able to delete the directory tree.
An ingenious workaround came from wbkang on StackOverflow.com: 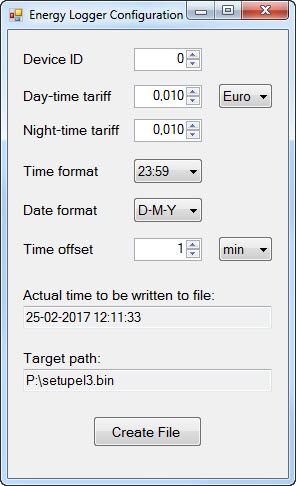 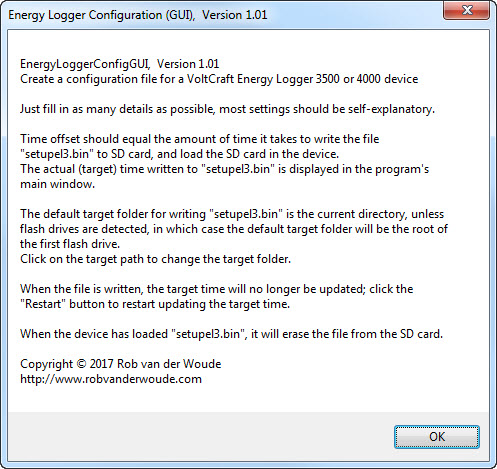 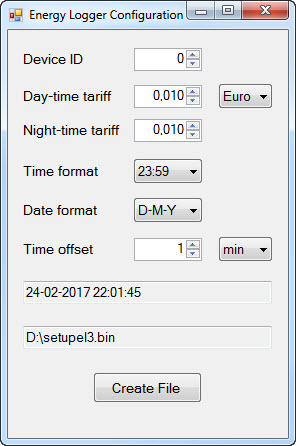 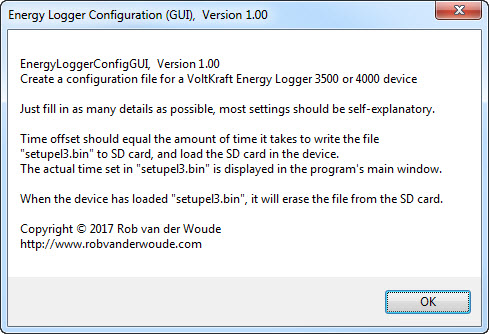 2017-02-23
• While working with my VoltCraft Energy Logger 3500, a device to measure and log electric power consumption, I was annoyed by the device's almost impossible manual setup.
I knew it could also work with a setup file on the SD card, and after some internet searching I found this page with info on the setup file format.
I also found some links to software to create a setup file, and more software to read the device's data, but none of these worked.
So for a start I wrote my own setup file creator in C# (batch and VBScript are definitely "sub-optimal" choices for handling binary output): EnergyLoggerConfig.exe.
• CountCharPairs.exe is a tool I initially wrote to debug PHP "Unexpected End Of File" errors caused by missing curly braces.
This first public release will check any source file for parentheses, brackets or curly braces, and return a warning if the number of opening characters does not match the number of closing characters.
See the program's help screen for details.
2017-02-22
• A minor update for CompareVersions.bat: an error in its command line error handling has been fixed.
2017-02-19
• CompareVersions.bat is an NT batch file version of its VBScript namesake, i.e. it compares 2 version strings and tells you which one is higher.
Run it without command line arguments for details on its usage.
2017-02-17
• A new VBScript function CompareVersions has been added.
It compares two version string digit by digit (instead of a string comparison which would tell you that "9.0" is greater than "10.1").
Read the comments in the code to understand its usage.
2017-02-16
• I added a new page on File Versions to the VBScript Scripting Techniques section.
2017-02-14
• As of now, I will use the ISO date format (YYYY-MM-dd) in my news pages.
2017-02-11
• Michael Klement pointed out a really thorough discussion of batch file comments on StackOverflow.com.
Besides the usual REM and double colons, alternative styles are discussed as well, each with their pros and cons.
For all batch scripters: read this discussion!
Michael also pointed out some dead links and an missing info about script signing in my PowerShell: Getting Started page.

Thanks Michael
2017-02-02
• I added a "Light Edition" of the VBScript wildcards example.
The "Full" edition allows a relative or absolute path in the filespec, and it returns the fully qualified paths of the matching files.
The Light Edition does not allow a path in the filespec, and it returns only the names (with extensions) of the matching files.
2017-01-31
• I added a page on handling DOS wildcards in VBScript to this site's VBScript Techniques section.
2017-01-16
• ResetDevices.bat is a new batch file to remove some or all disconnected devices.
It "evolved" from the now 13 years old RenewUSB.bat, but unlike the latter, ResetDevices.bat isn't limited to USB devices.
Both use Microsoft's DEVCON tool; if DEVCON isn't found, the batch files will prompt you to download it.
• Oops, ResetDevices.bat's first bug has been fixed: it would ignore doublequoted command line arguments (i.e. filters) if combined with unquoted command line arguments (i.e. options).
• While working on ResetDevices.bat, I also updated the DEVCON download link in RenewUSB.bat.
However, you should seriously consider not using RenewUSB.bat, unless you still use Window 2000 or XP...
ResetDevices.bat is definitely preferred!
2017-01-01
• I wish you all a happy and healthy new year!