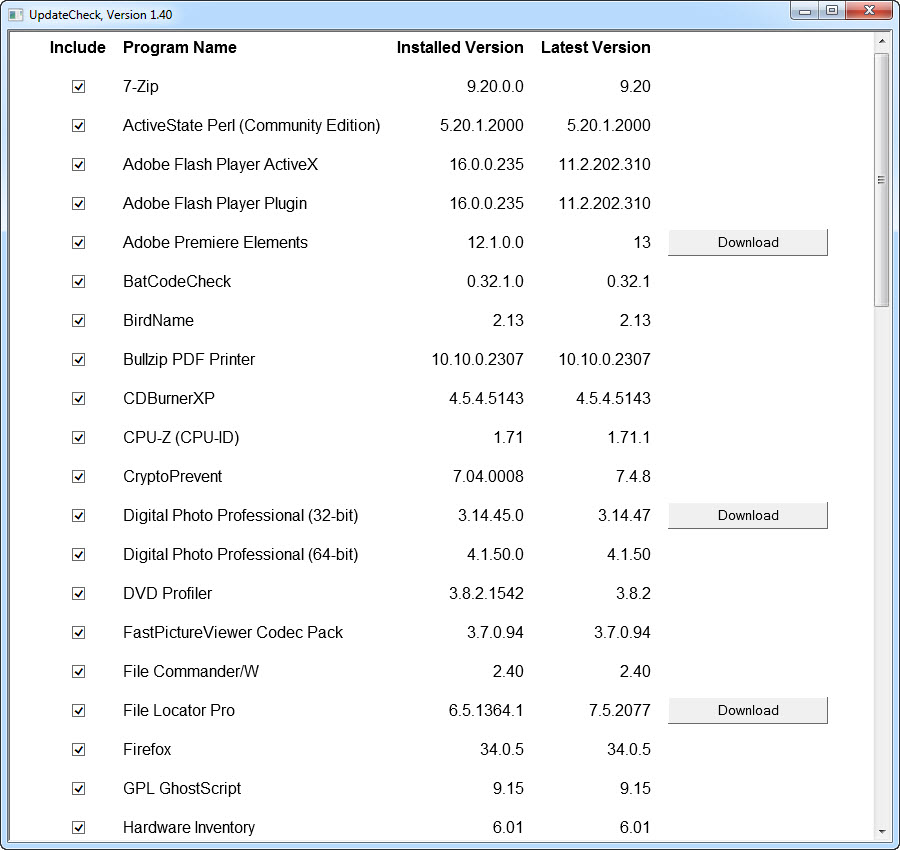 UpdateCheck.hta checks installed versions and latest available versions for several programs, and presents a download button for each program where these versions don't match.

The programs to be checked are listed in UpdateCheck's helper INI file UpdateCheck.ini.
This INI file also tells UpdateCheck.hta which version check techniques should be used for each program.

Next, it will read the list of programs from the INI file, and list them in the table in the program window.
For each listed program, the installed version is determined, using the technique specified for that program in the INI file.

When the installed versions for all programs are checked, the versions are listed in the table in the program window.

If a program's version could not be determined, the program is assumed not to be installed.
In that case, the checkbox for the program will be unchecked, and a variable will be set telling UpdateCheck.hta that a change has been made.
Upon closing UpdateCheck.hta, or when clicking the "Save Changes" button, if this variable was set, a popup message will appear, asking you if you want to save the changes.

By clicking the "Save Changes" button, only the selected programs will be written to the new INI file — after confirmation that you do want to remove the unchecked programs. 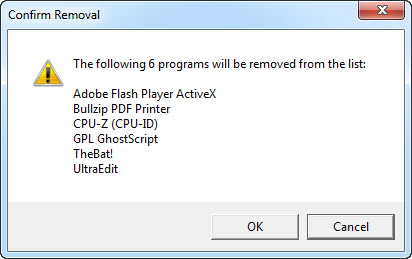 You can also manually remove programs from the INI file by deselecting their checkboxes and then save the changes.

You can manually remove a program from the list by deselecting its checkbox, or reinsert a program listed as "Not installed" by reselecting its checkbox.
Click the "Save Changes" button to make the changes permanent, or click "Yes" when prompted to save the changes when closing UpdateCheck.hta.
You may want to click the "Rescan Programs" button to run a new scan, testing the modified INI file.

As of version 1.30, UpdateCheck's INI file contains entries to check the HTA and INI versions for updates.

If an update for the HTA is available, a button with caption "Install" will be available.
If you click it, the HTA will download the ZIPped update, extract it into its own parent folder (overwriting itself), and restart its new self.

If an update for the INI file is available, a button with caption "Update" will be available.
Clicking it is like clicking the "Update Program List" button: the default INI file will be downloaded from the website and loaded.
You will still need to click "Save Changes" to overwrite your current INI file.

The following command line switches are accepted by UpdateCheck.hta:

Each command line argument can be made "permanent" by saving it in a plain ASCII text file named UpdateCheck.cfg, located in the HTA's parent folder.
The arguments may all be written as a single line, or each argument on its own line.

Removing programs from the list by deselecting their checkboxes was discussed in the first section.
This paragraph will explain how to manually add a new program to the list.
It will use fake entries or refer to entries from the default INI file to demonstrate the various techniques.

Several techniques can be used to determine a program's (installed) version:

If the specified registry key is terminated with a backslash, the default value for that key will be returned.
E.g. in the example above, HKEY_LOCAL_MACHINE\SOFTWARE\GPL Ghostscript\9.14\ would return an empty string (default value not set).

If the specified registry key is terminated with a backslash followed by an asterisk, the highest numbered subkey name will be returned.
E.g. in the example above, HKEY_LOCAL_MACHINE\SOFTWARE\GPL Ghostscript\* would return 9.14.

If the specified registry key contains an asterisk, the highest numbered match will be used.
E.g. in the example below, HKEY_LOCAL_MACHINE\SOFTWARE\Wow6432Node\Microsoft\Windows\CurrentVersion\Uninstall\Opera *\Publisher would return Opera Software ASA.

Use ListProgs.bat or ListProgs.exe to list all registry keys that can be found with the DisplayName parameter.

The most common locations to look for a program's version are:

If there are no registry values (or keys) available to determine the program version, try the executable's file or product version.

If not, try to find a value pointing to the executable's parent folder, or to a component or icon in a subfolder.
If a value is available, use it in RegPath and Regpath2, and specify the relative path from there to the executable in Executable (omit Executable2).

If no registry value can be used, nor is the executable located in the PATH, then specify the absolute path to the excutable in Executable, and its 32/64-bit alternative path in Executable2.
Wherever possible, use environment variables %ProgramFiles% and %ProgramFiles(x86)% instead of C:\Program Files and C:\Program Files (x86), in case a different drive letter is used by Windows.
Likewise, use %WinDir% instead of C:\Windows or C:\WINNT.

If the registry and file version methods fail, and if the (command line!) executable is likely to be found in the %PATH% variable, you may try calling the command itself to get its program version.
Many command line programs will return, amongst others, their version when called with command line argument /? (or sometimes without a command line argument at all).
CommandLine tells UpdateCheck.hta what command to use.

The main disadvantage of this method is that one can never be certain the executable's location will be in the %PATH% variable.

Use a WMI query only if you are desparate enough to wait for it to complete.

A query of the Win32_Product class in WMI's root/CIMV2 namespace returns a lot of information about (most of the) installed programs.
This info contains the program's version, and its installation path, if you're lucky.
Unfortunately, there is no way to tell if these properties will return any data or not, you'll just have to try.

And did I mention it is slow?
On my computer 40 non-WMI checks took 6 seconds, while 4 WMI queries took 77 seconds — over 100 times as long (these times do include the searches for the latest versions on the manufacturers' websites).

Still, slow may be better than nothing.

Use Win32Product with the program name that is returned by WMI.
Replace any version included in the name by a percent sign (a "wildcard" in WMI Query language).
If there is any doubt that the query will return the proper version, add TryInstallLocation, this will act as a failover: if no version is returned, UpdateCheck.hta will check if the install location is returned, and if so, use this to do a file version check on the executable.
You may also use UseProductVersion if TryInstallLocation is used.

To check the latest version of a program, search a web page on the manufacturer's site that shows the latest version in text (not an image).
Place its URL in WebsiteVersion.
Create a regular expression to extract the first occurrence of the version number, and place it in Regexpattern.

The download URL may differ from the URL used to check for the latest version, hence the mandatory WebsiteDownload parameter.

Manufacturers' website tend to change often, so the regular expression may at some time in the near future fail to find the version.
In that case, the latest version field in the UpdateCheck window will display the text "Not found", and a download button with caption "Check" is placed next to it.
You can either wait for the next INI file update (downloaded using the "Update Program List" button) or try and edit the Regexpattern and/or WebsiteVersion parameters yourself.

There are several issues that may prevent a correct version test result:

Using the CommandLine parameter you may use any script to find the installed version.
Finding the latest version, however, always requires a "cooperative" website.