Translate animal species' (chordata) names from one supported language to another with this program. 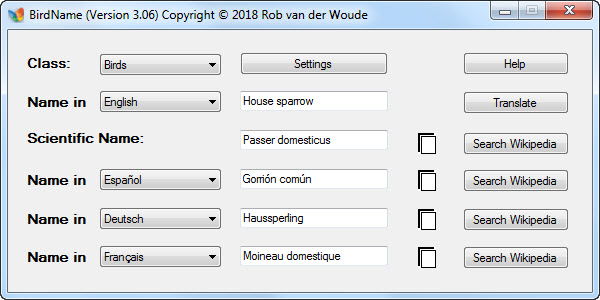 The program first retrieves a list of supported languages on Wikipedia (languages with at least 1000 articles on Wikipedia).
If it fails to open the list, it will use a set of cached lists instead, or if those aren't available, a set of embedded lists.
You can't use the program in a meaningful way without access to Wikipedia, but you will at least have access to the settings and help file.

Assuming you selected for the animal class, for the input language, and entered , the program will try and open the Wikipedia page en.wikipedia.org/wiki/House_sparrow.
After clicking , the program will search that Wikipedia page for the scientific name ("Passer domesticus"), which will then be displayed in the "Scientific name" input field.
To find the common names in the "output" languages, the program tries to open the Wikipedia pages for the scientific name in each of these languages (e.g. es.wikipedia.org/wiki/Passer_domesticus for Spanish), and uses a number of regular expressions to search these pages for the common names. 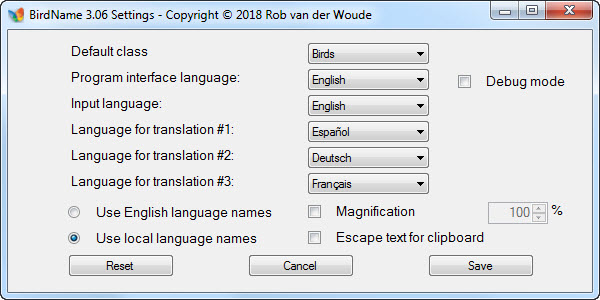 Use the button to change the program settings interactively.
This will open a second window, which allows you to select the default class, the program interface language, input language, output languages, window magnification factor (for the visually challenged), debug mode, whether or not to (HTML) escape text before sending it to the clipboard, and whether to display all language names in English or each in its own "local" language.

The program can also be configured using the following optional command line switches:

To create your own language file, run the command BirdName /P:xx (where xx is a valid language code).
If BirdName.xx doesn't exist in the program's parent folder, it will be created by the program.
The newly created file will contain all captions as key=value pairs, e.g. Aves=Birds, with the caption values in the currently active program interface language.
Open the file in a plain text editor, e.g. Notepad, translate each caption, and save the file.
Next time you run BirdName /P:xx your translations will be used for the program interface.

If the program doesn't show any captions at all, the automatic recovery procedure failed; rename or remove your language file and let the program recreate it as described here. 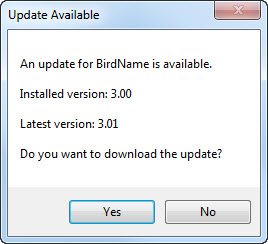 Each time the program is started, it will check online if an update is available.
If there is, a dialog box will pop up, asking you if you want to download the latest version.
Click to open the download page in your default browser.

The program comes with English and Dutch PDF help files embedded.
Each time help is requested, either by clicking the button or by pressing the F1 key, the embedded PDF help file will overwrite any existing file with the same name in the program's parent folder.

The names entered in the input fields must match the names on the Wikipedia pages (not case sensitive).
The Wikipedia pages must adhere to certain layout standards, which most of them do, though not all.
These standards sometimes change, in which case the program may fail.
Since the program can never be tested for all possible combinations of languages and species, some of these combinations may fail.

where (?<LocalName>[^<\d]+) is the expression for the common name we are looking for, and {0} will be replaced by the species' scientific name.

This program can be used without installing it — it is a true portable application.
Most of its helper files are either embedded or are created on the fly when required.

This program is the successor of the old Birdname.hta.
Development of the HTA version has been stopped.

Code to open the embedded PDF help file based on code by Dan Ergis on StackOverflow.com:
stackoverflow.com/a/8609599

Code to detect the minimum required .NET Framework version based on code by Fernando Gonzalez Sanchez on StackOverflow.com:
stackoverflow.com/a/18623516