2018-12-31
• By special request: the first public beta version of DialogBoxes DLL for COM scripting.
This first beta has only the MessageBox and DropDownBox dialogs available, and limited documentation.
The ZIP file does contain a batch file to register the DLL and typelib, and a sample VBScript script to examine and test the DLL.
2018-12-30
• Just to find out if it would be possible at all, I rewrote CapsLockIcon in PowerShell.
Not quite as good as the C# version, but adequate, and a welcome PowerShell exercise.
2018-12-28
• CapsLockIcon.exe and NumLockIcon.exe have been updated: they can now store their settings in the registry.
2018-12-27
• CapsLockIcon.exe and NumLockIcon.exe are two new GUI tools that will show the CapsLock and NumLock status in the System Tray.
Right-click the indicators for a context menu: Settings and Exit.
In these first versions, for now, settings are restored to default when the programs are loaded.
2018-12-26
• SystemTrayMessage.exe has been updated: the tooltip message is no longer mandatory; if not specified, no tooltip will be shown and switches /I, /L and /T are ignored.
2018-12-24
• KeyLocks.exe is a new batch tool to return the status of CapsLock, NumLock, ScrollLock and Insert keys.
Unlike the separate utilities like CapsLock.exe, KeyLocks.exe can (optionally) run continuously, and it can show its result on screen, in the window title, as return code ("ErrorLevel") and for Windows 10 it can even generate an ANSI sequence to help you display the result at the right hand side of the console.
Unlike the separate utilities like CapsLock.exe, KeyLocks.exe can NOT manipulate the keys.
Insert the following code at the top of your batch files to display the live status of the keys in the window title bar:

Thanks Martin
2018-12-22
• I am working on a new feature in WMIGen: a simple WQL Editor.
Because testing the interface takes a lot of time, it is not integrated in WMIGen yet.
You can test the "sneak preview" WQLEdit beta 1 as a stand-alone program.
Have patience when starting the program, it may take up to a couple of minutes to load all available WMI namespaces, classes and properties. 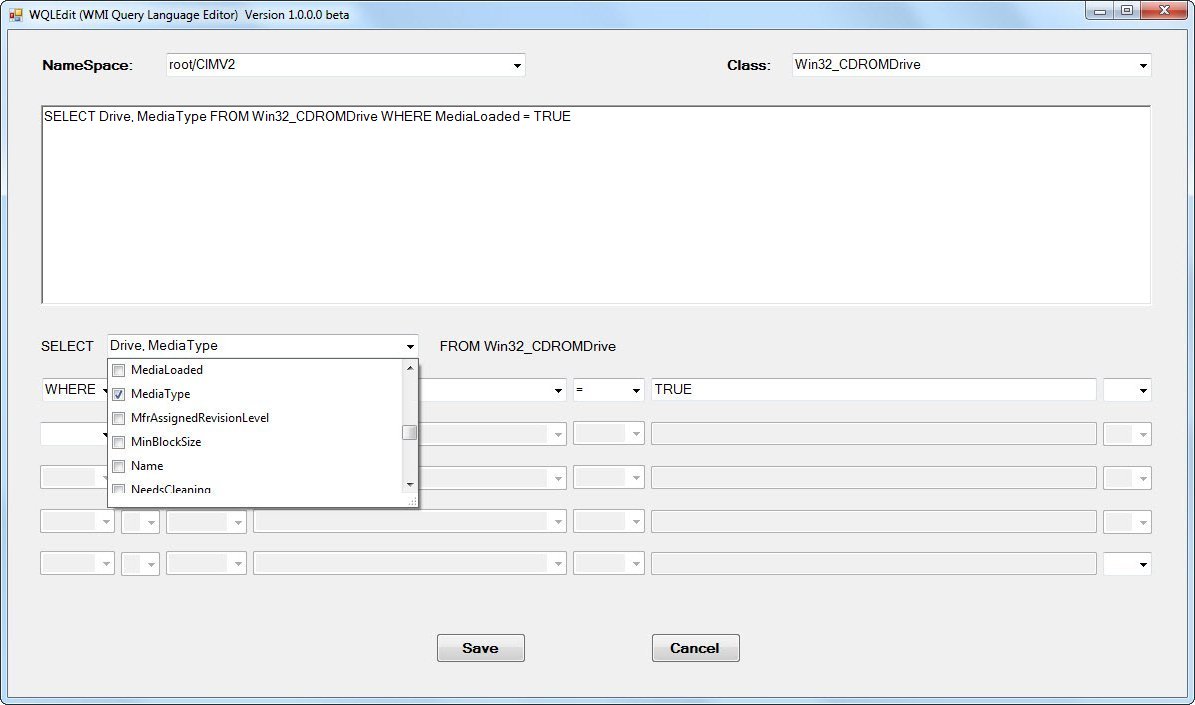 2018-12-10
• A bug in DateDiff.bat has been fixed: the subroutine calculating the Julian date was too eager to strip leading zeroes without checking if there actually was one.
It took a bit of debugging to find the error, so the updated batch file has a number of new features, including verbose output and debugging.
I also added the option to specify an alternative date format, instead of the computer's local date format.
2018-12-06
• WMIGen.exe has been updated:
• A minor update for BirdName.exe:
2018-12-04
• As of yesterday, this site supports secure connections (https://www.robvanderwoude.com/) besides the "classic" unsecure connections (http://www.robvanderwoude.com/).
So far, most pages seem to work fine with a secure connection, but I haven't finished testing, yet, if all images and scripts and stylesheets and iframes still work.
• And as of tonight (20:30 GMT) all HTTP requests are redirected to HTTPS.
2018-11-30
• BirdName.exe has been updated:
2018-11-27
• MultipleChoiceBox.exe is a new batch tool to present a list of choices as grouped checkboxes.
It was derived from RadioButtonBox.exe, but using checkboxes allows multiple selections, hence its name.
2018-11-20
• ConsoleState had a major update:
2018-11-15
• Henrik Jensen sent me a message stating that using FIND to convert strings to upper case still works in Windows 10 (the text on my web page still said it was tested in XP only).
What's more: of the upcase methods shown here, it is the only one that also works for non-ASCII characters!

Thanks Henrik
2018-11-13
• RadioButtonBox.exe "final" has been released.
The latest feature is the optional command line switch /DE to remove duplicates from the list.
2018-11-10
• A bug in WMIGen.exe's generated batch code has been fixed.
• Check out the (re)new(ed) WMI Queries for Hardware page if you need to collect hardware inventories.
2018-11-09
• Besides specifying the number of rows, you can now specify the number of columns too for RadioButtonBox.exe (but not both).
2018-11-08
• I added automatic window sizing to RadioButtonBox.exe.
2018-11-05
• RadioButtonBox.exe is a new batch tool to present a list of choices as grouped radio buttons.
It is equivalent to DropDownBox.exe, but with radio buttons instead of a dropdown list.
It is still in beta, I will be running more tests to check if the size and location of radio buttons work out for different scenarios.
2018-10-30
• A minor update for isDST.exe: it has been recompiled to work with .NET Framework 2.0 to allow using the program on older systems.
There is no change in the program's functionality.
2018-10-27
• A bug in InputBox.exe: the /I switch did not make all regular expressions case insensitive as intended; this bug has been fixed.
2018-10-26
• Another update of DropDownBox.exe: So the sample code presented two days ago can be simplified:

WMIC.EXE Printer WHERE "Network=TRUE" Get Caption | DROPDOWNBOX.EXE "Select a network printer" "Network Printer" /K /S
2018-10-24
• DropDownBox.exe has been updated: it now accepts redirected input for its list.
This is demonstrated in the following code to select a network printer (enter as a single command line):